The trio comprises three musical geniuses: Robert and Clara Schumann and Johannes Brahms. Clara married Robert with whom she fell in love when she was just sixteen though it meant challenging the iron will of her father who wished her to marry an earl or a count, never an impoverished composer. The Schumanns had eight children and Robert’s greatness as a composer was never in doubt, but he was also mentally ill, attempted suicide, and finally incarcerated himself in an asylum where he died two and a half years later.

Johannes Brahms entered the picture shortly before the incarceration and fell deeply in love with Clara, but was just as deeply indebted to Robert for getting his first six opuses published within weeks of their meeting. Clara was forbidden to see Robert in the asylum because the doctors feared she would excite him too much. Brahms became a go-between for the couple, ferrying messages to and fro, but both loved Robert too well to abuse his trust. Brahms learned instead to associate deep love with deep renunciation – and, coupling this love with early experiences of playing dance music for sailors and prostitutes in Hamburg’s dockside bars, he became a victim to the Freudian conundrum: Where he loves he feels no passion, and where he feels passion he cannot love.

Germany grows in the hinterland of the story from 400+ principalities to one nation under Bismarck. The great composers of the century (Mendelssohn, Chopin, Liszt, Wagner, and Tchaikovsky among others) have their entrances and exits – and the ghosts of Bach, Mozart, Beethoven, and Schubert are never distant.

Though firmly grounded in fact, TRIO unfolds like a novel, a narrative of love, insanity, suicide, revolution, politics, war – and, of course, music. 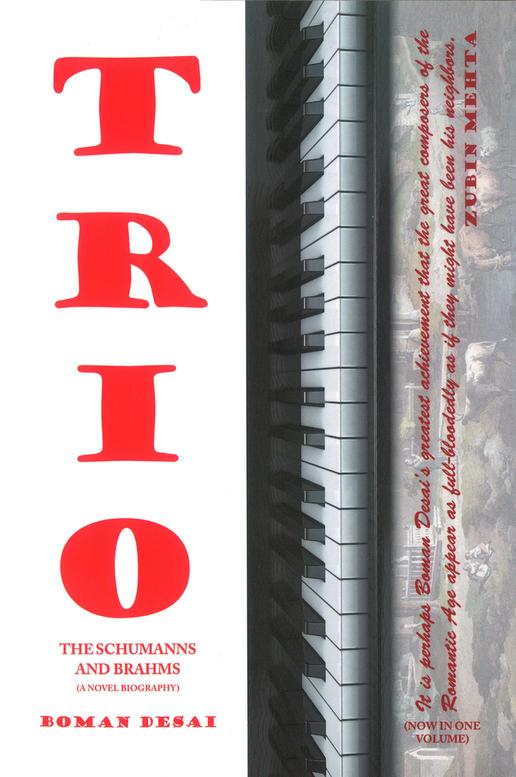 Boman Desai has researched this most romantic of stories thoroughly, citing original correspondence among his sources, and writes so compellingly that it is like discovering the story anew.  I was glad to see that he presented the great composers of the age, when their paths crossed those of his trio, warts and all, with the greatest sympathy. Bravo!

Compelling and illuminating, TRIO is a story that Tolstoy might have told.... Would that the American reading public could appreciate such a story as well told. I hope it eventually gets the recognition it deserves.... Surely a tour de force.

Exhaustively researched, charming and readable, TRIO is a massive achievement. I was loath to put the novel down.

... is a novel for people who hate novels (who read about only "real" things) and a biography for people who hate biographies (for the footnotes and other such intrusions), but it is neither wholly a novel nor wholly a biography. It has the dramatic impact of a novel, but lacks a novel's concision - and, while it may be as inclusive as any biography, I have invented dialogues, streams of consciousness, and adopted other such novelistic techniques. Much of the dialogue was lifted directly from the correspondence on the assumption that conversation is more dramatic than correspondence. Other letters I transcribed into the very scenes they described on the same assumption. I wrote what I knew, I researched what I didn't know, and I imagined what could not be researched. The bibliography comprises 126 books, but Clara's diaries and Brahms's correspondences were easily the most plundered sources. 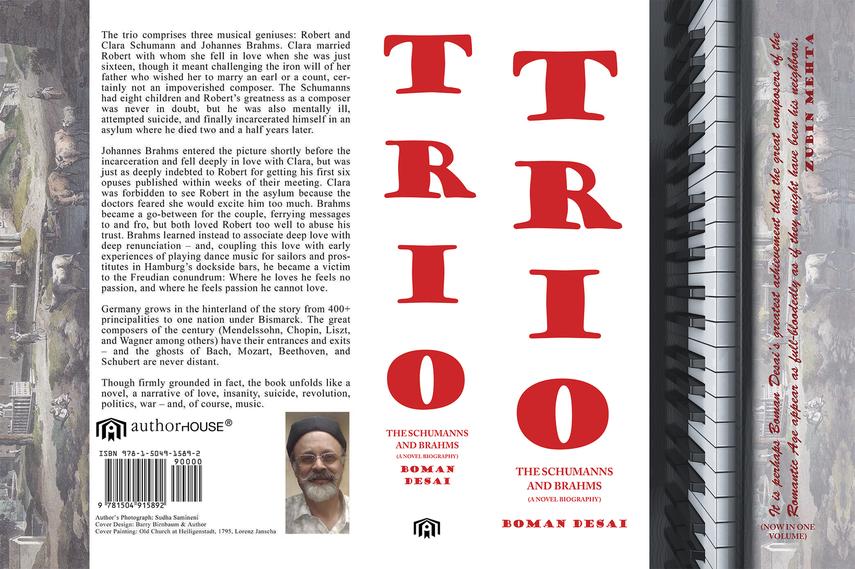 A NOVEL BIOGRAPHY OF THE SCHUMANNS AND BRAHMS ...

On March 7, 1897, a shrunken Johannes Brahms, suffering from cancer of the liver, attended a performance in Vienna of his Fourth Symphony for the last time. A friend had said that only Brahms could have written that symphony, and even Brahms had had recourse to certain locked chambers of his soul for the first time – but he had finally run out of locked chambers.

At the end of each movement the conductor turned to Brahms’s box to acknowledge the composer. The audience stood, providing a downpour of applause, movement after movement, until the end of the symphony when the downpour swelled to a monsoon. The emaciated old composer, though tired of standing, wished no more to sit or to leave than they, his lovely Viennese, wished to let him go, their eyes no less damp than his own, his cheeks sheeted with tears, all of them knowing it was the last time they would be seeing one another.

He died less than a month later, but the music that remained – the residue, the essence, distillate of his life, gold from straw – remains impervious to fang and claw, at once the heart of the riddle of life and medicine for the heart.

I loved and admired TRIO.

DIANA ATHILL, Instead of a Letter, Midsummer Night in the Workhouse, Stet, Somewhere Towards the End

I loved your book. You completely transported me. Congratulations.

The language of TRIO is so vivid it makes one want to explore the composers’ repertoires.